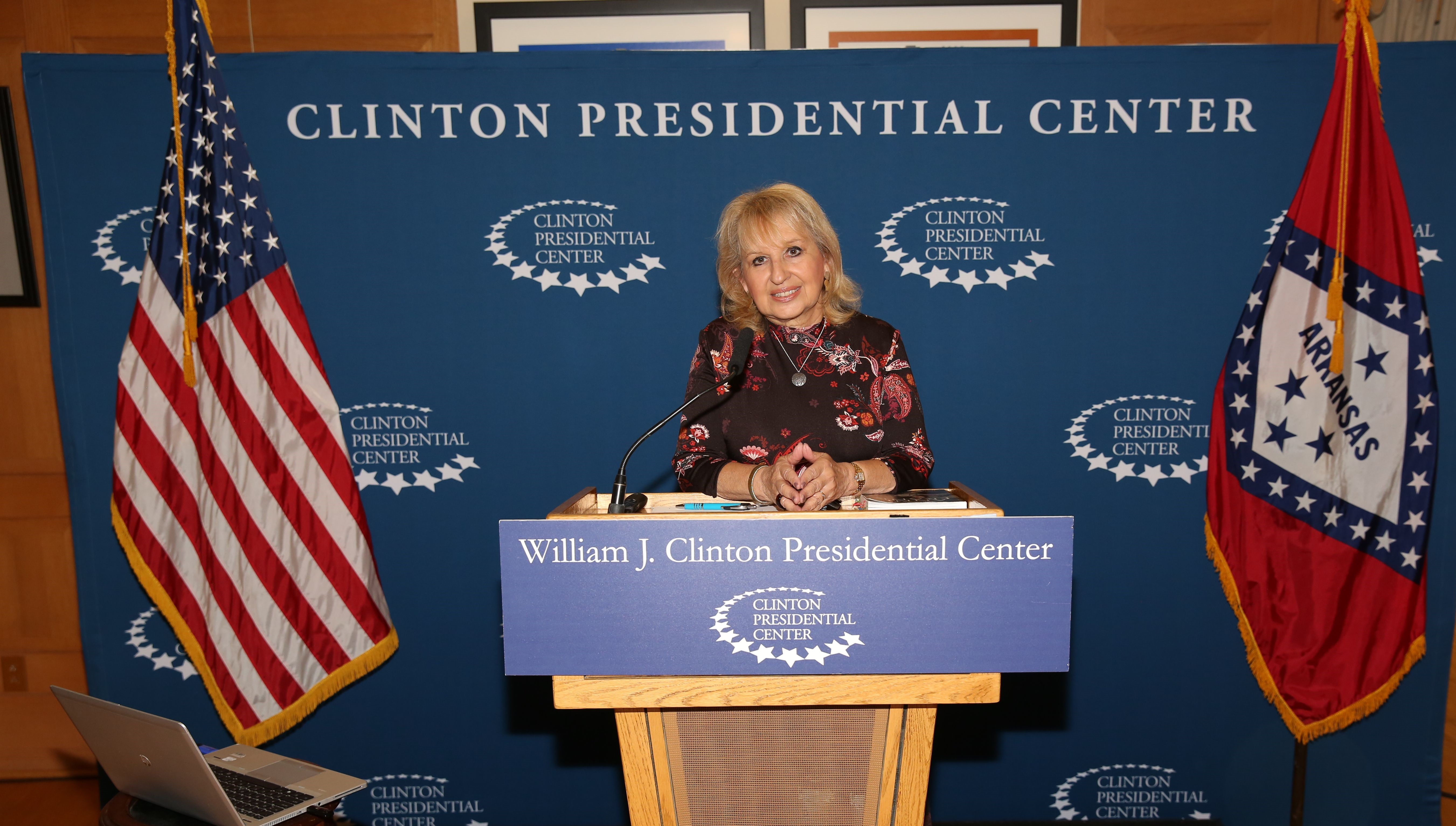 Speaking at the Clinton Presidential Library and Center, Little Rock, Arkansas, November 2019 (above)

'I'm grateful that you were able to speak at the Clinton Presidential Center, and for the good work you're doing to share Anne's wisdom in new ways - the lessons of her life are as important as ever. You have my best wishes.' President Bill Clinton, February 2020 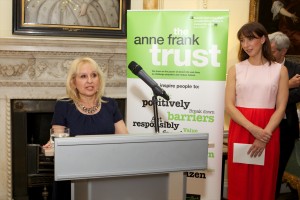 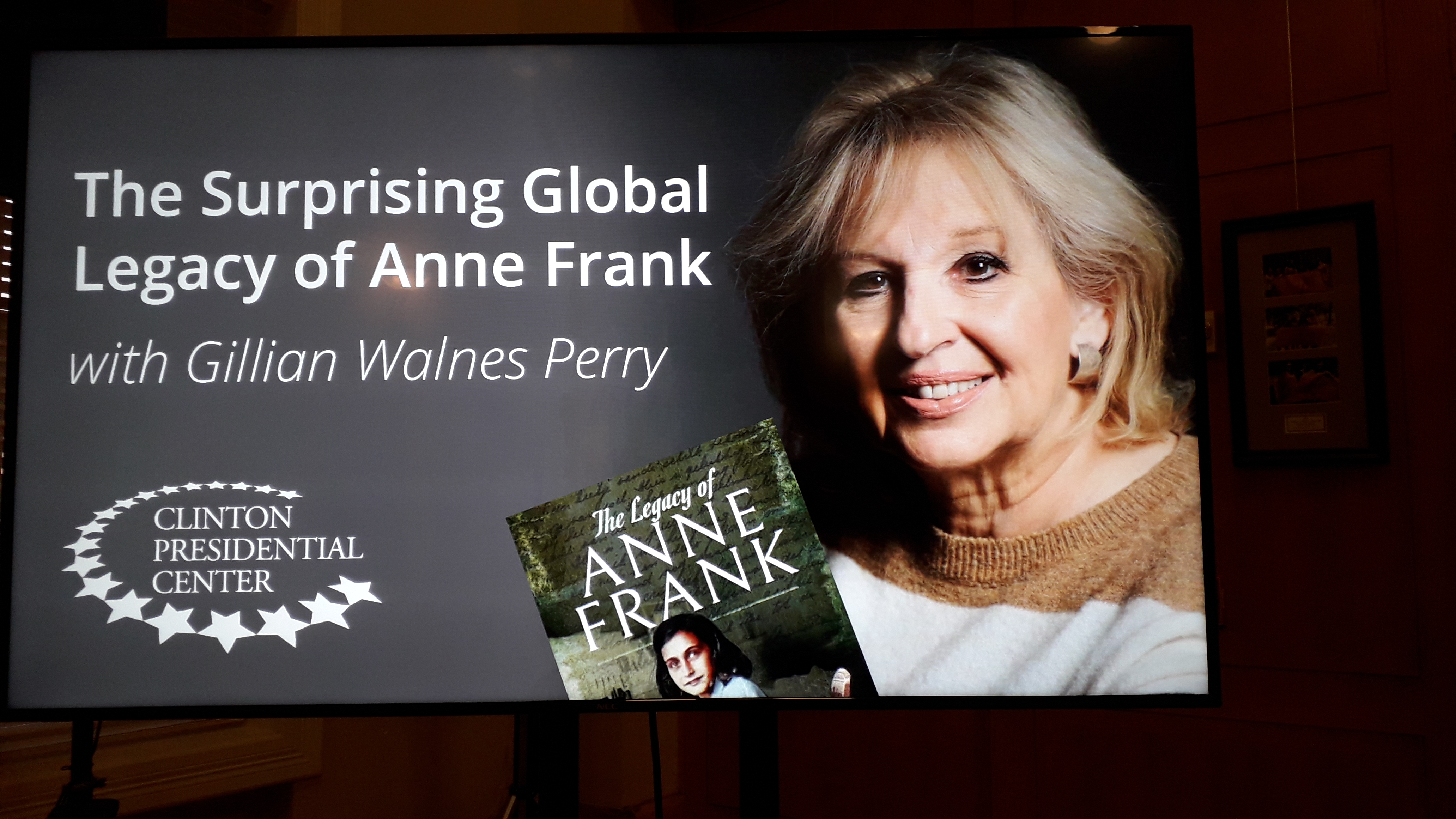 I am a popular and in demand speaker, having spoken in locations as diverse as 10 Downing Street in London,  the United Nations in New York, the Clinton Presidential Center in Little Rock, the Union League Club of Philadelphia and many cruise ships around the world. I can speak to large community, corporate and educational audiences on a range of topics connected to the life and times of Anne Frank and my 25-year experience of educating about her. I also offer lectures on fascinating social history topics.

My talks and lectures are tailored for audience profile, nationality, age and time restraints. Usually 45 - 60 minutes in length, and given with a richly illustrated Powerpoint presentation. All talks, speeches and lectures can be delivered without images and can include a Q&A.

For downloadable and live streamed lectures used during the Coronavirus lock down and beyond, the two lectures on Anne Frank's life and legacy are combined into one, entitled 'What We Can Learn From Anne Frank, Anne's Life and Surprising Legacy'. For age 10 up and cross curriculum for school use. For pricing see information on Home page http://gillianwalnesperry.com/

I have worked with the story of Anne Frank for 30 years, both in the UK and internationally, and have a unique insight into her life and times. While building the Anne Frank Trust, I have been

privileged to meet some of those who knew Anne Frank and who have quietly shared their personal memories with me, as well as hundreds of Holocaust survivors who had parallel experiences to those of Anne Frank and some of whom were with her in the concentration camps.

I take the story of Anne’s life through her family background in Frankfurt, their flight to Amsterdam, Anne’s emerging personality as a popular and irreverent school girl, her desperation in hiding (as described to me by the family’s courageous helper Miep Gies), her physical and emotional transition into an adolescent and her developing moral framework, which has proved to be an inspirational to millions. I describe Anne’s tragic and poignant last days, including from first hand witnesses.

Through the years, Gillian has become an international figure associated with the legacy of Anne Frank. She is like no other individual. Lisa S Hoffstein, former Director, Anne Frank Center for Mutual Respect, New York

woven itself around the world. From the hard fought publication of Anne’s diary in 1947 (and how it so nearly didn’t happen), to the creation of the Anne Frank House in Amsterdam, and the effect of learning about Anne Frank on millions of people around the world, some in desperate and difficult situations. It contextualises the Anne Frank educational projects against the background of world history over the past 30 years and explains the impact she has had in some of the world’s most turbulent and violent regions.

I will also talk about some of the remarkable people who have been involved in my work, including Nelson Mandela, UN Secretary General Kofi Annan, Steven Spielberg, A-list stars such as Audrey Hepburn and Angelina Jolie, music legends and royalty. There will be surprising insights into all these people and my encounters with them.  I also describe the unforgettable night attending the 1996 Academy Awards in Hollywood together with Miep Gies, the courageous helper of the Frank family in hiding.

This talk is based on my popular book 'The Legacy of Anne Frank' and can include readings from the book, plus a book signing.

Gillian Walnes Perry visited Syracuse University in November of 2019. She was brilliant, compassionate, warm, and expert in her content delivery, communication style, and engagement with participants.  The audience included university students, faculty, administrators and staff, chaplains, and members of the local community.  We remain very grateful for her wisdom and connectedness.  Dr Diane R. Wiener, Research Professor and Associate Director of Interdisciplinary Programs and Outreach, Burton Blatt Institute, Syracuse University

Those in attendance adored you and were deeply moved and inspired.  Your beautifully written accounts of everything - including how Nelson Mandela and Audrey Hepburn’s lives were deeply influenced by Anne Frank’s diary – were a revelation, and your lively delivery, connecting with each and every member of the audience, was as natural and human as it was masterful. Dr Jud Newborn, founding historian and creator of the New York Museum of Jewish Heritage

I have attended several online events this summer and this was my favourite one. Gillian's ability to instill hope and inspiration into what can sometimes be heavy material, is a great talent. Michael Demone, Lecturer, University of Toronto

Thank you again so much for being our speaker at Founders’ Day yesterday. I have had lots of positive comments today about how much people appreciated your inspirational words.  Alistair Brien, Head Teacher, Bournemouth School for Girls

Thank you for everything.   It was such a powerful and moving night.  I have received incredible feedback. Jill Landgraber, Glen Ridge High School, New Jersey

Gillian Walnes Perry is an amazing speaker. She broaches the very serious and mature topic of Anne Frank's life in a sensitive, engaging and age appropriate manner. Her presentation is educational, thought provoking, inspirational and hopeful. We are grateful that our students were able to experience this opportunity. Mara Starkey, Librarian, Covington School, Los Altos, CA

How tea drinking was first introduced into England, and how afternoon tea was popularised and became the social institution of the UK.

Using vibrant on screen displays, this talk includes the introduction of delicious tea menu items; the customs and etiquette surrounding afternoon tea; examples of the finest silver and porcelain tea ware, and the rise of public tea rooms and tea dances. (During national Afternoon Tea Week, I was interviewed by six BBC radio stations about the history and etiquette of afternoon tea, as well as writing articles for newspapers and websites).

“Gillian gave an online lecture on The Social History of English Afternoon Tea to Historic Houses members and we could not have been happier by the feedback we’ve had from them. Her storytelling, presentation slides, and attention to detail made for a fun and fascinating talk, and we’ll certainly be looking to arrange many more events with Gillian in the near future.” Dominic Head, Historic Houses

Gillian was a fantastic speaker providing a thoroughly well researched, entertaining and interesting foray into the customs and history of tea drinking, the origins of afternoon tea and some informative and amusing anecdotes about the customs and rituals which we have to this day as we enjoy our tea and sweet treats.  A really fabulous afternoon Cathy Mosley, Live, Laugh, Love

This lecture, explores how the European monarchies are interconnected, how they were created, their links to the British royal family through Queen Victoria,

as well as focusing on some fascinating characters in the royal families of Denmark, Norway, the Netherlands and Belgium, past and present. Some inspiring, some controversial and some surprisingly racy lives are covered.

This lecture explains the introduction of clothing suited to leisure, sports and holidays. We now take leisure wear as part of life, but how did informal and practical leisure clothing come about?

As leisure time grew, and women could join men in undertaking sporting and leisure activities, clothing was adapted for both sexes. This lecture covers Victorian seaside and the earliest sportswear, the introduction of trousers for women, and the evolving of leisure wear throughout the 20th century. There are interesting insights for both men and women. 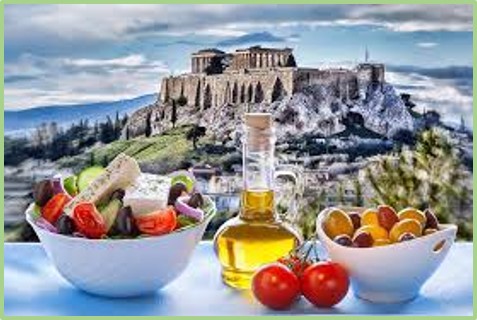 In the middle of the 20th century the British adopted a curiosity about new cuisines both in their own kitchens and eating out, through inspired cookery writers and flamboyant restaurateurs who dramatically changed the face of the British home and restaurant scene. I describe the impact on the post war British diet of Mediterranean flavours and ingredients, as well as the history of immigration to Britain from Mediterranean countries and the development of British tourism to those countries. 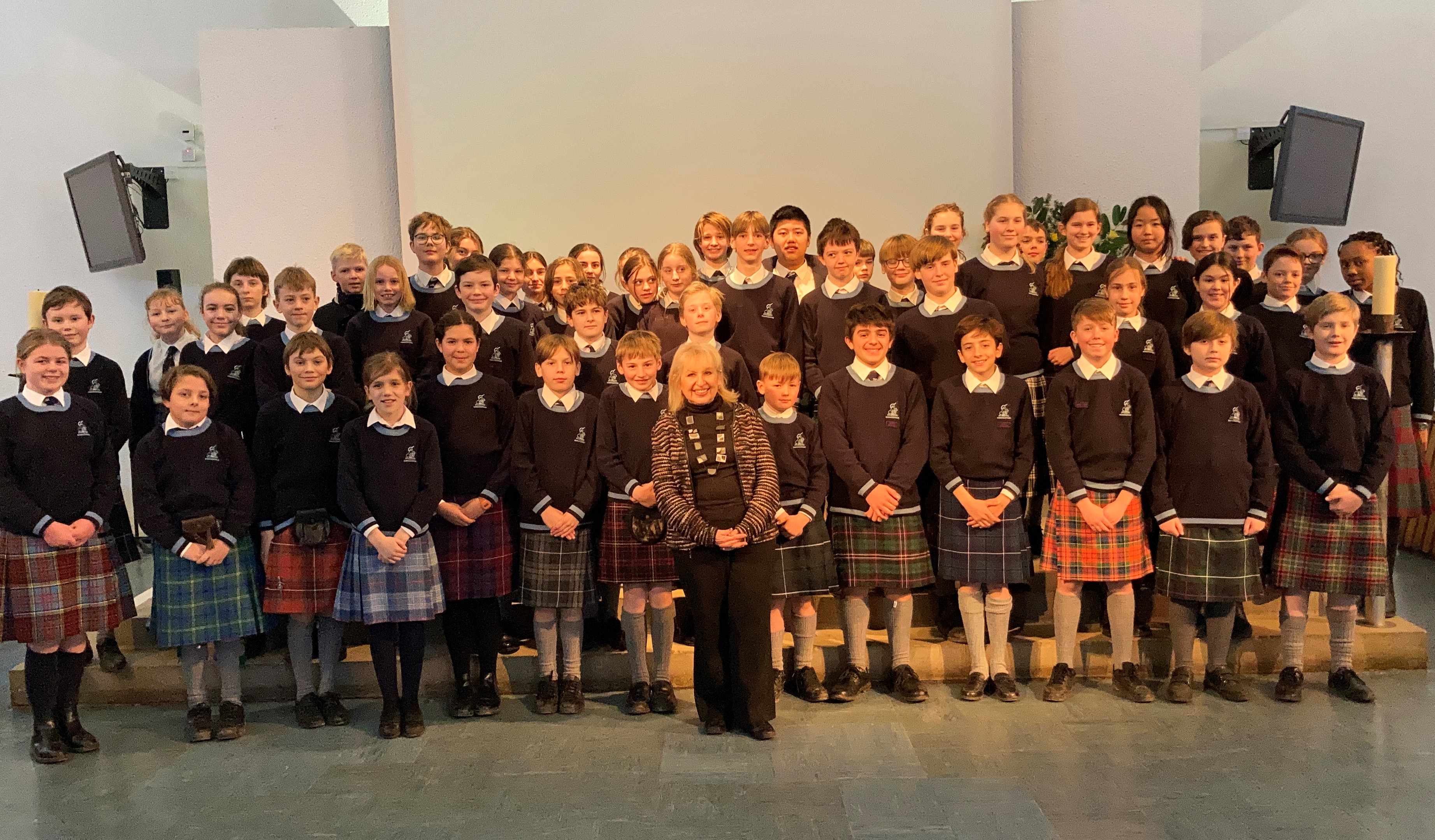 Heartfelt thanks for joining us at Gordonstoun School to deliver the inaugural Prince Philip Memorial Lecture. You spoke so well to three different age groups across the school making her life story accessible, fascinating and relevant; our youngest pupils couldn’t contain their enthusiasm for questions and during our senior school lecture we could have heard a pin drop, such was the skill of your delivery. The legacy, illustrating need of understanding and tolerance between communities could not be more relevant in our world today. Thank you for joining us and for making the inaugural Prince Philip lecture so memorable.  Karen MacGregor, Director of Student Development

The excellent turnout of students on a week when they have several major assignments due is a testament to the esteem with which they hold you and your knowledge of all things Anne Frank. My students have benefited enormously from your knowledge and expertise and your willingness to answer their questions. Dr Jennifer Craig-Norton, British Academy Postdoctoral Fellow, University of Southampton

May 2017    University of Southampton Department of History - Anne Frank, Her Life on Film

February 2019  4th 7.00 pm Portcullis House, Palace of Westminster - The Legacy of Anne Frank and celebrating the 20th anniversary of the Anne Frank Declaration

October 2019 17th  Prior Park School, Gibraltar  The Life and Legacy of Anne Frank